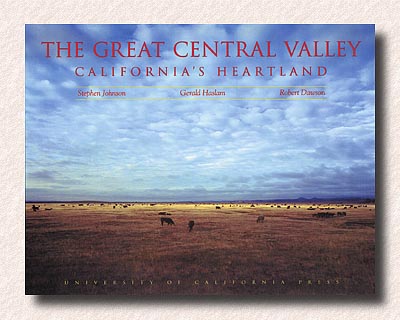 I grew up in the San Joaquin. I never dreamed I would be involved in the arts. An architect maybe, more likely a lawyer. I remember the fields all around me, and the farmers and farm workers in those fields. I can't recall thinking much about them at the time, their link to the land seemed natural, expected.

It was years later before I realized the influence some of those memories had on me. Those wide open spaces with their geometric rows and patterns had set something in motion in my mind. Although the workers in those fields seemed ordinary and natural, there was nonetheless something strange about the scene, something uncomfortable about dragging men and machines across the earth to cut, tame, and harvest. Even in the Great Central Valley, the process seemed disconnected from the food in the grocery store.

But I was drawn to those fields, in fact I still am. Walking, riding my bike, and eventually on long drives, those endless, decaying two lane country roads became a passion. My partner in this project, Robert Dawson was riding those winding levee roads outside of Sacramento on the big river up north. I was gradually daring farther out of Merced's suburbs, edging ever closer to the foothills. Sometimes in wet white fog, but most often with heat radiating on the horizon and blurring the road into mirage--those roads became visually and emotionally important. Strangely, for me they were similar experiences to hiking in the backcountry of Yosemite. There was a similar space and solitude.

I didn't give much thought to productivity, pesticides, chemical fertilizers or irrigation. Irrigation was what some of my high school friends had to get up at 2 or 3am to do, so they could go back to bed, and get up again at 4:30am to milk the cows before school. On graduating from high school, one good friend who grew up on a dairy said he was leaving the valley and would never come back.

I did eventually settle on photography as my work, seduced by the beauty of a photographic image, by the wild country it took me to, and I think by my childhood memories of valley fields. I know that when I think of how we have altered this world, I think of the valley first.

The valley is too vast to understand easily. And too complex. On a purely visual level, it is a very difficult place to photograph. It is hard to find a vantage point to see very far, and yet everywhere there are wide vistas. It is certainly not about old men with scruffy beards or decaying barns and quaint wooden fences. It is so much more than that. It is tempting to look for quirky sides to the valley, and some have proven irresistible, but they are not telling, the valley is much more than its rural oddities.

It is heat, oppressive and reassuring, and land, vast but fading into a growing haze that makes the horizon disappear. It is a valley so big that it doesn't seem like a valley. It is stacks of statistics so impressive and large that they quickly lose meaning. It is also a land whose anonymity is cause for concern, because what goes on here is not usually made of high drama, but of long-term change and consequences that are easy to miss, and possibly devastating. It was a challenge to go home and try to see this place clearly.

When Bob Dawson and I decided to return home to the valley to photograph, I did so with mixed emotions. In some ways I don't think I was quite ready to go home. My love for my home was still there, but there were many other emotions as well. It wasn't long before we realized that what we were doing could be important. We were creating an opportunity to go home, to try to understand where we came from, in a way that might never have been possible had we stayed. It also became clear that there were compelling reasons to embark on The Great Central Valley Project, outside of any personal motivations.

The Great Central Valley Project began in the summer of 1982 with initial sketches for the project, long discussions and our first photographic fieldwork. We began background research and continued photographing during 1982 and through 1983. In 1984 we began to seek funding for the project. The entire photographic project was sponsored by the California Academy of Sciences in Golden Gate Park, San Francisco. A special thanks is extended to Eugene F. Behlen, then Public Programs Director for his help, guidance and enthusiasm for the project.

Our fieldwork, fund-raising and basic research continued through 1984 and 1985 resulting in the premiere of the exhibit at the California Academy of Sciences on July 2, 1986. The exhibit closed on October 16, 1986. During this period, 433,000 people visited the museum. Our good friend and fellow son of the valley Dr. Michael Black organized the Symposium The Great Central Valley: Heartland in Transition which was conducted at the Academy on October 11, 1986 with 150 people in attendance and 24 speakers.

It was back in 1984 that Bob and I became acquainted with Gerald Haslam, who we found shared our interests in the valley. We were immediately fond of Gerry, he knew plenty of stories about a dingy bar called Trouts, that Bob and I stumbled onto in Oildale. Gerry agreed to write the text for the book at a planning meeting in 1985. We were excited at the prospect of pulling together the diverse and complex history of the valley into one volume.

The exhibit began its tour through the valley at our co-sponsoring museum, the Fresno Metropolitan Museum. The tour continued through mid-1988 with an intinerary that included Chico, Redding, Stockton, Merced, Bakersfield, Modesto, Visalia, Tulare. A national tour is planned for 1992, during which we hope to reach a few million people with the exhibit.

Ten years ago, when I organized the exhibit At Mono Lake, I realized that as an artist I had an obligation and an opportunity to have an impact on things I cared about. As a landscape photographer I feel an attachment to the land similar to those who work it, and care for it. Such obligations are strongly felt. I spend time moving around the American West because I identify with the landscape, and I care about its future. This may be the most true in the valley. Because it is my homeland, the concern is personal as well as social.

This is no longer the wild valley Native Americans enjoyed, and it can never be again. The native valley was long ago sacrificed to agriculture and settlement. But we have built something valuable here, we have carved a land able to produce food like no other. Having grown up in one of those valley towns and cherishing many of my childhood memories, that sacrifice is one I can partially understand. But I can't understand some of the directions we are currently going, damaging the land the valley's wealth rests on, nor paving it over to make room for more suburbs.

Looking back over time, the fate of irrigated societies is not promising. Most have destroyed the land that sustained them. All have used the best technology available to them, but they have rarely seen the warning signs of trouble ahead soon enough. Fertile valleys and plains have been turned to deserts. The poisoning of birds at Kesterson's agricultural wastewater ponds may be such a warning sign. And although we are proud of how far technology has brought this valley, we don't seem to be getting much better at looking ahead. Our predictions are more long term, and based on something somewhat more reliable than fortune tellers, but are often not taken any more seriously.

There is a growing tendency to set aside what we hear about the latest danger to our health or the land. And it's no wonder. There constantly seems to be something new we are told to fear. Something new in our food or our air that has been found to be dangerous. And we begin to shut down. We feel powerless to really effect these dangers. It may be ironic, but the long term health of the valley may be tied to the same decisions we probably ought to be making about our own long term health. We need to find new ways to control pests, new ways to keep the land fertile, and use only the water that is absolutely necessary to grow our crops. And we need to look carefully at those crops. Just because we can grow something in a particular place doesn't mean we should. It may ultimately take more from our valley than the money it brings.

We are caught in the same web of surviving day to day, paying the bills and getting by, much like any other culture in history. A farmer can't simply decide he doesn't like pesticides or chemical fertilizers and stop using them tomorrow. The bank loan officers will be at the door foreclosing on his land to sell it to someone who will use whatever it takes to pay the loans. It takes involvement by many different people to change how we treat our land. Perhaps we have to accept less than perfect produce. Maybe that produce needs to cost more. And as more and more countries around the world export food, maybe our goals should turn toward a different definition of productivity, where quality is as important as quantity, and where quality means free of chemicals and good tasting rather than perfect in appearance or easy to pick, pack and ship.

There are some major challenges facing the valley. We wanted to help solve them. We are not agricultural economists, scientists, or farmers--not even politicians or bankers. The best thing we could imagine to do was to explore the valley, work in it, react to it, and make our art. We wanted to draw attention to this place, and construct ways for people to become more involved, and more appreciative of what is at stake in the valley.

The Great Central Valley Project exhibit, and now this book, exist because we were interested in our own artistic response to the landscape of our homeland, and our interest in stimulating greater discussion and participation in the ongoing evolution of this valley. We don't have the answers, but we have learned a few important questions. Change is often slow, but if we can help shape tomorrow, rather than letting it shape us, we believe this valley can survive as a healthy home, and as the productive heartland of California agriculture. The photographer W. Eugene Smith in his book Minamata (a Japanese fishing village suffering from Mercury poisoning), said that as artists "to cause awareness is our only strength." As artists we can only hope to rise to that challenge.